Pontiff invited for a visit to coincide with beatiﬁcation

SOUTH Africa is set to have its first saint and martyr Benedict Daswa. Last week Pope Francis authorised the signing of the proclamation for the beatification of Daswa, a lay person from Limpopo who opposed witchcraft. The ceremony could take place as early as October.

In honour of the occasion, the Southern African Catholic Bishops’ Conference has invited Pope Francis to come out for a pastoral visit to coincide with the celebration.

Usually the pope conducts only canonisation ceremonies, but it was felt that because it was such a special occasion for South Africa and because the country had never had a formal papal visit before, it would be the ideal time.

Archbishop of Joburg Buti Tlhagale said it was a momentous occasion for all South Africans, and especially for the country’s 4 million Catholics. “This is the first South African saint. We have been waiting to have our own saint for years. Having our own saint means having our own spokesman in heaven – a model of someone who believes and dies for his faith.

“Most of the time we hear about this – but it happens in other places and other times. This time, we have our own martyr who lived in the same time and country as ourselves. It is most striking and inspiring. “Once the country wakes up to this, they will realise what an achievement it is to have had someone among us who stood up for his faith amid great opposition, against the cultural convictions of certain people, and openly opposed witchcraft in a bid to stand for his faith”, said Tlhagale.

Preparations have started for the ceremony, which is expected to take place at the Thohoyandou Stadium in Limpopo. “We will be encouraging Catholics from all over the country to be there”, Tlhagale said.

If Pope Francis accepts the invitation, the government would have to be consulted as the visit would involve a head of state, and proper security would have to be provided. “However, if the pope cannot make the beatification ceremony, we hope he will come next year for the canonisation – the invitation is an open one”, said Tlhagale.

Daswa, 44, was born in Mbahe village in Limpopo. He became a Catholic while training to become an elementary school teacher. Daswa eventually built a church and a school there, becoming its principal.

He was opposed to witch-hunts and took a stand against them because they were leading to the killing of innocent people accused of witchcraft. Daswa rejected the use of muti or traditional medicines for protection against evil or for success in business, marriage and other areas of life. 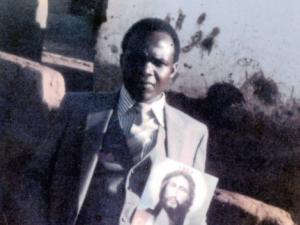 Benedict Daswa, who died for his faith, is likely to be beatified in October.

In 1990, Daswa refused to give money towards the hunt for a witch. A few days later, on February 2, he was stoned and bludgeoned to death. The diocese of Tzaneen opened an inquiry into Daswa’s death that ended in July 2009.

It resulted in 850 pages of testimonies from people who witnessed the life and death of Daswa. This was forwarded to Archbishop Angelo Amato, Prefect of the Congregation for the Causes of Saints, after they were signed by the then-bishop of Tzaneen, Hugh Slattery. Chancellor Father Andre Bohas MSC was the postulator in Daswa’s beatification and canonisation cause.

The Catholic Church has purchased land at Mbahe and is hoping to develop a R25 million pilgrimage and shrine site in his honour. The process has taken 15 years.

Maize and Ivory, report about the life of the people of Chiawa village in Zambia