Greetings! We are still in the Christmas Season and, hopefully, in the Christmas spirit! But this Newsletter will be short because, as you read in my special message “A FREAK ACCIDENT”, I am now reduced to the use of only one hand; it is an awkward way of typing!

One good positive point, following that unfortunate accident, is that I have a very good “private driver and helper”. Indeed, Justin Ramde, a Burkinabe, going into his third year of theology in Cedara and living at our House of Formation in Merrivale, has been here since last Friday. He takes some weeks from his holiday to come here to help me. He has been very good, not only driving me safely here and there for different pastoral commitments, but also helping me during Mass (like holding the ciborium so I may distribute Holy Communion with my healthy hand), and showing himself very much of service for doing various things requiring both hands!

He was very happy to take part in the Christmas Eve Mass at Mother Teresa’s Home; the small chapel was packed with surely more than 100 poor and sick residents, adults and children, together with the Sisters. They sang wholeheartedly for the birth of Jesus and everybody was in a festive mood. After Mass, each one received a present from the Sisters. On Christmas day, we were at City Deep for the francophone community. The church was full and the choir was really good.

After Mass, four doctors from the congregation gave me a free medical consultation! They told me that the healing seems to be taking its course well. Thank you also for all your prayers!

I want to wish you all a very good Christmas Season and a Happy New Year!

As we come to the end of 2016 we look back with gratitude to the Lord for all the graces and blessings that we have received. The National Directors of Missio / Pontifical Mission Societies are extremely thankful to know that millions of people have been helped spiritually, physically and intellectually through the solidarity and generosity of our donors throughout the world. We ask God to bless and protect the Missionaries who dedicate their lives to bringing Jesus’ new life, forgiveness, mercy, hope and healing touch to all Nations.

In this our 10th edition of OUR MISSION we also give the official statistics relating to the Catholic Church in the whole world. The number of bishops, priests and deacons have increased slightly, the number of Religious have decreased. Unfortunately the average age in all categories has increased. We all should work in promoting vocations to Priesthood and Religious life along with our regular prayer for new vocations and for all our serving pastors and leaders in our Church.

Sadly with the numerous scandals that have rocked the Catholic Church in recent years, one can become blinded to the so many dedicated and good persons who serve and labour in the same Catholic Church throughout the world helping millions of students, orphans, sick, elderly and abandoned persons. The Catholic Church certainly does more than any government, NGO, other religious group or charitable organization, in reaching out to and serving in situations of suffering, exclusion, discrimination and injustice throughout the world irrespective of whether those concerned are Catholic or not.

As we look forward to the celebration of Christmas and the beginning of a New Year, let us commit ourselves as Christians living in South Africa, Botswana and Swaziland to be more open to the Universal Mission of the Catholic Church. To move from a self-absorbed and self-interested view—only the needs and challenges of my parish and diocese— to a truly catholic vision where we become concerned also about the needs and extreme challenges that our brothers and sisters face in other parts of the world, in particular in areas of first evangelization and where the Church is persecuted and struggling to survive and grow.

I wish you and yours abundant blessings, joy and peace from the Christ Child in this Christmas season! Let Jesus dwell in your life in order that you may be transformed ever more to make Him present to our world!

Greetings! I hope you are well and that you have fully entered into the beautiful time of Advent! Yes, this is an occasion for each Christian to prepare to receive the Lord in a missionary way. Which means to involve others in this great hope and expectation of Jesus who is coming at Christmas. On the first Sunday of Advent, Pope Francis reminded us that “The Gospel is not trying to frighten us, but to open our horizons to further dimensions, giving meaning even to everyday events.” This is an invitation to open our hearts and minds to others, thus to live as missionaries wherever we are. The Pope adds: “we are called to enlarge the horizons of our hearts, to be surprised by the life that is presented each day with its newness. In order to do this we need to learn to not depend on our own securities, our own established plans, because the Lord comes at the hour which we don’t expect.” He concludes by saying that this time is “an invitation to vigilance, because, not knowing when He will come, we must always be ready…” On 14th November, I went to Malawi. The first night, I stayed at Mua Parish where I started as a young missionary in 1970; a long time ago! As part of the Parish life, Fr. Claude Boucher, M.Afr, from my home diocese in Canada has established an art school and a museum to help keep the Malawian culture. I suggest you visit their website at kungoni.org. You can see the museum and different aspects of his work with his team of artists. Then, from 15th to 21st, I was in Salima, on the shore of Lake Malawi. There, I did my yearly retreat in the house of retired bishop Rémi Sainte-Marie, bishop emeritus of Dedza Diocese and archbishop emeritus of Lilongwe arch-diocese. He welcomed me warmly and respected my times of prayer and silence. It was a good spiritual experience.

From the 22nd to the 26th in Chipata Pre-Formation Centre (Zambia), we held our meeting of Vocation Directors of the Southern African Province. We were from the four Sectors of Mozambique, Malawi, Zambia and South Africa. 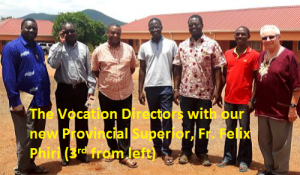 This new Centre in Chipata currently has its second intake of 18 aspirants from Mozambique, Malawi and Zambia (nobody from South Africa!). From October to May, they are spending time discerning their vocation, exploring their self-knowledge with psychological assessments, in order to understand better their deepest aspirations and desires in the light of God’s call. They also study the Bible, Church history, liturgy, the missionary dimension of our lives as Christians, and how to reach out to people, especially the poor, and how to share with them the Good News. They also have activities such as manual work, sports, etc. After this intense period, if they are still decided and if they are accepted, they will be called to go to the First Phase of their formal training: three years of philosophy in Balaka, Malawi.

This month, our aspirant Patrick Kadima wrote an article for our Provincial blog. To read it, go to our blog at mafrsaprovince.com.

Wishing you all the best for a blessed Christmas! Fr. Michel Meunier, M.Afr

Greetings! Surely, a very important event which took place on 1st October is the ordination to the diaconate of 6 of our students in Merrivale. Being at the end of their third year of theology in Cedara, they were ordained deacons. They are Alfred and Daniel (both Rwandese), Amorain (Togolese), Anthony (Ghanaian), Eric, (Mexican) and Theophile (Burkinabe). On the same day, eleven candidates of second year received the order of acolyte, their first step toward priesthood. They are Philippe (Malian), Christopher (Zambian), Martin, Robert and Victor (all Burkinabe), Éric and Pierre (both Congolese), Ryan (Filipino), Silas (Burundian), Dominic (Indian), and Francis (Nigerian).

Our deacons ordained last year – now in their fourth and last year of theology – will, in the coming weeks, go to their respective home-countries to be ordained priests and take a well-deserved holiday with their families. After two or three months’ rest, they will go to the missions where they have been appointed. They are Robin (Zambian, appointed to Tunisia), Damian (Ugandan, appointed to DR Congo), Alphonse (Rwandese, appointed to Burkina Faso), Albert (Burkinabe, appointed to Tunisia) and Konrad (Tanzanian, appointed to South Africa). CONGRATULATIONS to all! We place you all in our prayers that you may be good and faithful missionaries. These are really good news to celebrate Mission Month!

As we prepare to celebrate the 150th anniversary of our foundation (1868-2018), we rejoice in having so many young Africans joining our ranks! At present there are 492 students in our formation programme (all in different African countries); 90% of them come from within Africa. During the first hundred years of our existence, our candidates came from Europe and North America. In Africa, our priority was to promote the diocesan clergy, and not our own missionary Society; we wanted first to establish a strong local Church. Only in the last 30 to 40 years have we started to recruit in Africa for our own. At present, 284 of our members are African. Our new Superior General and 2 of his 4 assistants are from Africa. Thus, we are starting to fulfil the wish of our founder: the initial work of evangelisation would be done by European and North American M.Afr., but it would be continued by the Africans themselves! Yet, we are still waiting and hoping for some South Africans to join us!

This month, Patrick, our only candidate, wrote from Ghana. Here is a short excerpt from his email (in the box to the right). As you can see, we put a lot of emphasis on the learning of the local language, so we may be closer to the heart of the people we work with. Also, I had a chance to visit Pascal (see last month’s Newsletter) on 13th October in Assisi; he is really working hard on learning Zulu! Keep it up, Pascal! In Henley, they are waiting for you!

God bless you as his missionary. Fr. Michel Meunier, M.Afr 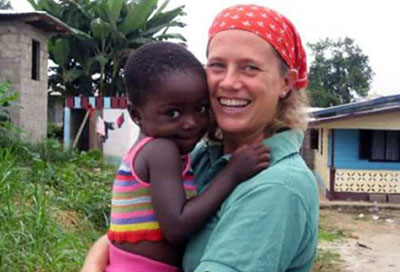 October is the month that the Church dedicates specifically to the Missions. We begin the month celebrating the feast of St Thérèse of the Child Jesus (1 Oct), she along with St Francis Xavier are patrons of the Missions.

During this month the faithful in all parishes should be informed about the realities of the Church’s mission activities throughout the world. It is the responsibility of each and every priest and pastoral agent to explain to their parishioners the immense needs and poverty, both physical and spiritual, of so many Catholic communities throughout the world, particularly in so called “Mission Countries”.

Every Catholic should be well informed as to the tremendous necessity that remains for the missionary activity of the Church in so many parts of the world. Billions of people still have not received the Good News of Jesus Christ. In too many countries small Christian minorities live in situations of poverty, alienation and even persecution. This past year we have experienced the abduction and/or killing of numerous missionaries — priests, religious and laity. This past week a Spanish missionary, Sr Isabele Sola Matas was shot dead in Haiti.

There are over 7 billion people living in the world, about 2,2bn are Christians, of which, just over half are Catholics meaning that only about 16% of the world’s population are Catholic. Sadly 1,1 bn people claim to have no religion whatsoever. If we are committed Catholics then we have to be Missionary Disciples and these statistics should move us to action. A true Christian cannot be indifferent to the plight of billions who live without the liberating message of Jesus Christ.