In line with the call of Pope Francis to devote the 2018 Synod of Bishops to young people, the Archdiocese of Kasama decided to dedicate the whole year to them. Catholic Youth for Christ was the theme that was chosen to guide the year. The Year of Youth was launched with Solemn Mass in a packed Cathedral by young people from all parts of the Archdiocese.

The adolescence young adult stage is a critical time in the life of young people. It is a stage where they are searching for their place in the Church and society. It’s a time when they need to be grounded in their faith. Role models, mentors, spiritual guidance, counsellors are much needed at this critical stage. When not much attention is paid to young people then there is the risk of losing some of them to new religious denominations and new ideological movements.

In St. Anne’s parish, pastoral care of young people is one of the most important ministries. Our parish has a large vibrant youth group scattered over our 15 outstations but the majority of the organisations are to be found in the central parish area as this is in town. Most of the young people belong to lay groups such as Xavarians movement, Young Christian workers, Junior legionaries, Stellas (Liturgical dancers), Alter boys club, Senior youth (those transiting from youth to Adults). Besides this, the young people have their own Small Christian Communities where they meet every Sunday afternoon to share the word of God. They also hold a youth council once a month. We also have Youth Alive and Young Christian Students. With so many groups, one cannot just leave them in the hands of Parish Priest. There has always been a tradition in the Parish that the curate and stagiaire give special attention to young people. Each lay group and Small Christian Community for the youth has a youth leader who accompanies them and works together with the youth chaplain and promoters. Without praising ourselves, this system has always worked well and as a result it has become the practice in the diocese that a priest, stagiaire, and a sister are assigned to youth ministry in the Parish. 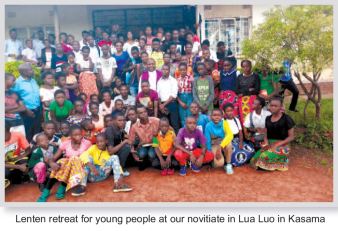 At the beginning of the year, all youth groups meet in the Parish to plan the activities for the coming year. The activities range from the spiritual (retreats, pilgrimage to the old mission of Chilubula, biblical and doctrinal quizzes, spiritual talks), to charitable works such as visiting the sick and homes of the physically challenged, plus social activities, sports, cultural and talent shows, youth day celebrations, career guidance, sensitization on social issues like drug and substance abuse, issues of Justice and Peace, youth camps, among others. Some activities are organized at the centre level, parish, deanery or diocesan level. At the parish level the program is done by the parish executive together with the chaplain. Every time there is a Church council or Parish council the youth organisations also give their report.

One annual event that attracts many young people is the pilgrimage to Chilubula, the Cathedral in Zambia where our confrere, Joseph Dupont, the first Bishop of the region is buried. The pilgrimage to Chilubula was started by our predecessors in the Parish. Now it has become an annual event in the deanery. Last year in October 2018, I accompanied 400 young people of whom half was from our parish, on a 35km journey on foot. It was an enriching experience for me walking with them, singing and praying, giving talks at various stations and especially celebrating the Eucharist for them at Besnar Centre, 5 km from Chilubula.

Some challenges for youth ministry today

A number of our young people come from families with different denominations among its members. Unlike in the past where you would find that the whole family was Catholic; today, with the coming of Pentecostalism, the situation is different. Some have defected to these churches. You find that in a family of five some are Catholics, others are evangelicals or Pentecostals. This affects the faith as Catholics tend to shy away from expressing their faith, in fact at times, they belittle their faith. For example one youth shared that his siblings, who are no longer Catholics, laugh at him when he makes the sign of the cross.

It’s easy to notice that most of our young people’s way of praying is influenced by these religious movements whose leaders have a big following on social media. This confuses them and leads them to question their faith in Catholic doctrines. 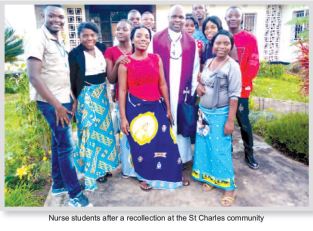 A good number of our young people are raised by single parents; others have been orphaned at a young age and were brought up by their grandparents. Some have never met their fathers. Dealing with such young people needs care and attention which cannot be solved by Mass or the administration of sacraments. It needs spending time to listen to them and counselling them. Peer counselling is a skill that is needed.

The widening gap between Urban and Rural Youth

There is a growing gap between young people coming from urban and rural setups. St. Anne’s Parish has a small section of the parish in town while the other, bigger part, is in a rural setting. Young people living in the countryside are more disadvantaged as they have limited access to social facilities. We have some outstations where getting to school is a challenge. In some areas, children have to walk 10 km on foot to reach the nearest primary school. In the rainy season, roads get really bad and some bridges are washed away. Added to that, the grass grows tall so that it becomes risky to walk in the bush and on top of all that some villages are widely scattered. In such areas it is difficult to find someone who has finished secondary school. This poses a challenge of leadership in the Church. It also increases a vicious circle of poverty.

As a result, there is high incidence of school drop-outs, early marriages, and teenage pregnancies. In the year 2017, I baptized 17 adults among whom were 8 school girls aged between 14 and 18 years of age who had dropped out of school. Later I discussed with their parents and church council how to ensure that they go back to school. As pastoral agents it is our task to take a keen interest in the formal education of our Christians if our ministry is to be transformative.

Youth ministry has always been part and parcel of our priority as witnessed by some of the lay movements which our confreres started in various countries, by the youth centres we still run and by the big number of young people that have been educated by the Missionaries of Africa. Today we need to invest more in this noble ministry because it is by starting with young people that we can be assured of continuity in the Church and mission. Pope Francis rightly says “youth are the now of God”. I believe so. They are not only the future leaders but the present hope of the Church today.