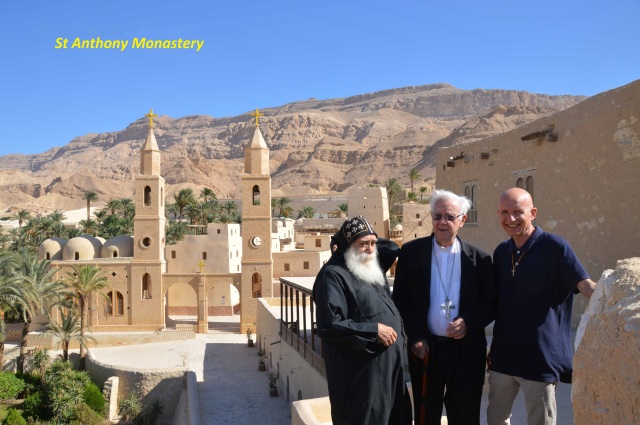 In 1992, Bishop Anthonios Markos started the Coptic Orthodox Church in Johannesburg. Archbishop George Daniel met him in 1993 and since became his friend. A reason is that there are many struggling independent churches in South Africa but the Coptic Church is truly African since the beginning. They could learn from it. The Egyptian government organised a Forum of Heavenly Religions in Sharm El Sheikh, Sinai on September 28-30, 2017. They asked Bishop Markos to send somebody from South Africa and he selected Archbishop Daniel. He accepted to visit Egypt but it was said that he needs a companion to deal with the challenges of such a journey. I accepted with joy to accompany him.

At Novotel, we met an Austrian professor, a German journalist for Germany and an Algerian journalist for Russia, a priest and an imam from South Sudan, an imam from Mali, another imam Pakistani residing in Ireland. We went directly to the Conference Palace. Soldiers surrounded it. They were meant especially for the government officials: most of them left with them. It is a big conference centre. Participants might have been around 2,000 people. Personalities started speaking only in Arabic. There was a simultaneous translation on earphones. The one of the Archbishop did not work… The theme was tourism and religion.

In a context of terrorism there are fewer tourists in Egypt. So tourism needs promotion.  Sinai is beautiful for its mountains and the Red Sea. It offers climbing, diving and therapeutic facilities. Especially it’s the place of the burning bush and of the 10 commandments revelation to Moses. Statistics show that religious tourism is more regular than others especially in front of terrorism. There is need to improve the roads and communications… South Sinai Governor came with Antiquities Minister and other officials. An evangelical bishop praised the government for authorising the building of a church… Muslim scholars of Al Azhar University were there beside churches’ leaders but no Jews, all in religious clothes. During tea time we could speak with a few bishops especially the Coptic Catholic Bishop and the local Catholic Coptic parish priest (ex Comboni student in Zambia), an evangelical bishop, the nuncio and his secretary… A Christian tour operator proposed her services for pilgrimages… We finished by a magnificent lunch around 15:00 which is normal time in the Middle East. We inaugurated a beautiful mosque in the evening. We had dinner with conference people on the flank of a mountain above the town centre, there was an orchestra…

On Friday morning we took a plane to St Catherine Monastery. We got a bedroom at Morgen Land hotel, the only one of the small town. Again military presence was heavy. The monastery was small for the big crowd of the conference. It needs restoration: paintings are dark and many things are worn out. We were told they are working on it. The oldest manuscripts of the bible are there but in the crowd we lost track of the Texan monk who was ready to show us the library. It is the oldest continuously occupied monastery and library… The name St Catherine of Alexandria was given by some Crusaders. A living thorn bush represents the burning bush… We stopped at the foot of the mountain thought to be of the Ten Commandments revelation but had no time to climb it…

In the evening, in front of the illuminated mountains, there was a beautiful UNESCO rather religious singing concert with singers from 15 countries… some Christians other Muslims… It was about peace and love…The introductory speech sounded a bit too nationalistic and pompous. It is understandable in the context of terrorism: Egypt is stronger than Islamism. An English-speaking Bedouin spoke with us critically of the government.

We believe that the aim should be a reconciliation between different religions. Tourism in the Middle East can be a tool.

I thank Bishop Markos and the Coptic Church in Egypt for allowing this wonderful trip to Egypt with the visit of key positions in vibrant mid-east Churches, parishes, famous shrines and monasteries and even of Alexandria, Giza and National Museum with good guides. The warmth of the people, their conversation and the good food compensated largely the honking and chaotic traffic, heavy schedule and airport lack of communication and utilities. 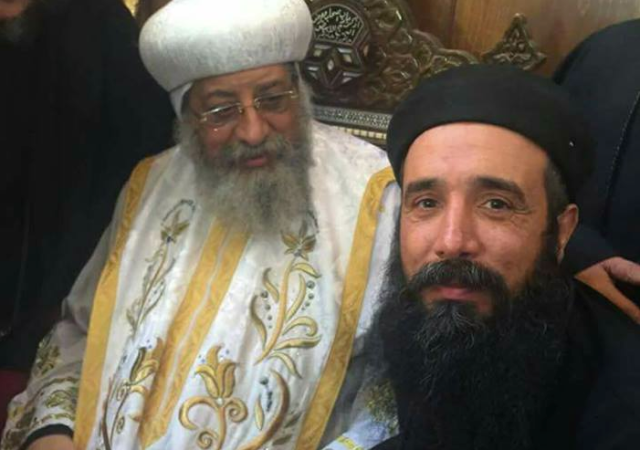 Let us pray for the late Coptic priest Fr Samaan Shehte murdered on October 12, 2017, that his death may contribute for peace and justice in this divided world.