By Serge St-Arneault, M.Afr. Director of the Afrika Centre, Montreal.

On May 27, 2017, I was privileged to take part of the priestly ordination of 14 new priests, among them some Jesuits and Capuchins together with diocesan priests. Two thousands Christians gathered inside the Cathedral of Child Jesus in Lusaka vibrated along the beautiful liturgy by expressing its joy, especially when the names of all those ‘handsome’ young men, according to one of the speakers, were announced.

It happened on the day before my final departure from Zambia. I took off again from Lilongwe on Wednesday to arrive in Montreal on June 1 at noon time. By then, I was very far away from Africa where I lived 25 out of my last 30 years of life.

I went home, meaning to my mothers’ place, after few days at St-Hubert Street where I will be stationed by August 1 as Director of the Afrika Centre. Though still on holiday, I wanted to come back to Montreal yesterday to be present this morning to the priestly ordination of a Cameroonian into the Archdiocese of Montreal. Reverent Claude Ngodji was ordained by Mgr. Christian Lépine in a church dedicated to Our Lady of Africa. 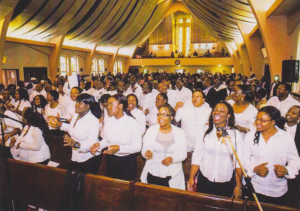 This Catholic Mission is celebrating its 4th year of existence. This community brings together Africans from all over French Speaking African countries who have settled all over Montreal Island. Four major trends make this community special: fraternal gathering, meaningful liturgy, education into faith and opening to a changing world.

I am grateful to witness such great moments into the life of the Church. Free, I went to Africa at the age of 26 in 1981, I feel also free to come back to my mother land today. My joy is to see that Africa is no longer a remote and unknown far distant land but very much present in Montreal with its vibrant faith and hope.

See also the translation into French: