In collaboration with the Presentation Sisters, the Zambia Association of Sisterhood (ZAS) and the Association of Men Religious in Zambia (ARMS) are inviting you to attend two prestigious conferences.

Religious Life in an evolving Universe. Date: Saturday 21st May 2016 from 08.30 till 15.30 hrs. Venue: International Spirituality Centre at the Christian Brothers opposite the roundabout leading to the airport. Please, bring your packed lunch. Morning and afternoon teas will be provided.

Gail Worcelo is a Catholic sister and co-founder of Green Mountain Monastery in Greensboro, Vermont USA, along with Bernadette Bostwick and the late Passionist priest, cultural historian and Teilhardian scholar Thomas Berry.

Green Mountain Monastery is a new emergence in the Catholic tradition that seeks to give expression to a theology rooted in the evolutionary dynamism of an unfolding universe.

Gail holds degrees in Clinical Psychology and Christian Spirituality and divides her time between life at the monastery and teaching and leading retreats around the world.

She is passionate about contributing to the evolution of the Catholic tradition in this new “Moment of Grace” and has presented at gatherings such as: LCWR- The Leadership Conference of Women Religious, Catholic Theological Union, International Congregational Chapters of Men and Women, Catholic Theological Union, as well as to groups, seminaries and formation houses in India, Indonesia, Ireland, Australia and Latin America.

Gail finds inspiration in the great role Catholic sisters have played in the evolution of consciousness and culture throughout the ages and is interested in contributing to the revival of women’s religious life by encouraging women to take on this vital dimension of the tradition. 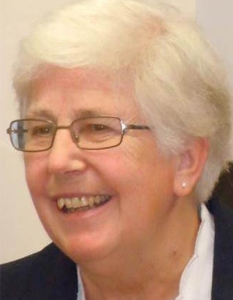 Date: Saturday, 28th May 2016 from 08.30 till 15.30 hrs. Venue: International Spirituality Centre at the Christian Brothers opposite the roundabout leading to the airport. Please, bring your packed lunch. Morning and afternoon teas will be provided.

UISG – On April 1st 2014, Sr. Patricia Murray (Dublin, 1947) assumed the position of Executive Secretary of the International Union of the Superiors General. Sr. Pat, a religious of the Institute of the Blessed Virgin Mary (Loreto Sisters), has a Master’s degree in both Education and Theology and a Doctorate in Practical Theology. She has been a member of the General Council of her congregation and was the former Executive Director of Solidarity with South Sudan.