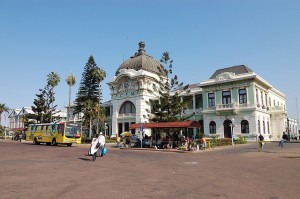 On Friday 15th May 2015, I was standing on the platform of the Ressano-Garcia railway station waiting for a very special train coming from South Africa which was foreseen to cross the border at 08:00. It finally arrived at 12:30 carrying 420 Mozambicans, mostly youth with no other possessions than their clothes. About 50 South-African Police were manning the train. Twice as many, including Immigration Officers, were on the Mozambican side. A South-African helicopter was flying over our heads to supervise the proceedings. Everything went well.

The “victims of xenophobia” (name given to these people by the local population) were made to sit on the floor in groups of 50. They were immediately dispatched to 7 buses and 4 railway carriages that had been waiting since early morning.

What was their crime? They were simply caught by the new South-African law by which men-hostels and flats are systematically searched, preferably in the middle of the night, to arrest any undocumented person. They were then sent to the Lindela Transit Holding Centre before being escorted to the nearest border post. These work-seekers are treated like criminals in the name of security. This is a futile and expensive exercise because, as far as Mozambicans are concerned, they can go back at will to South Africa since the border is so porous.

What is more disturbing is the general feeling. In spite of official denial, foreigners, even businessmen, are not wanted anymore in South Africa.

It is time for us Christians to stand up and claim with the Freedom Charter that “South Africa belongs to all who live in it”. This can be applied to anyone because there is a little bit of a foreigner in each one of us. We need to uphold the Biblical Tradition found in Leviticus 19, 33: “Do not ill-treat foreigners who are living in your land, treat them as you would a fellow-Israelite and love them as you love yourself. Remember that you were once foreigners in the land of Egypt. I am the Lord your God”.

NO TO XENOPHOBIA –  NO TO RACISM – NO TO FORCED REPATRIATION